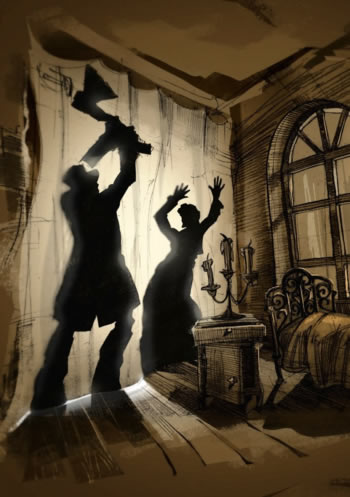 "Everybody wants to change the world. Nobody thinks to change himself."

Dostoyevsky's Crime and Punishment is crime thriller meets Karl Marx and Jesus Christ. Grounded in the realistic context of a St. Petersburg slum, the anti-hero Raskolnikov commits murder as a sort of experiment. "Have I the right to murder?" he wants to know. "Can I overstep normal human bounds?"

One of the most extraordinary novels of all time gets inside the mind of a starving, destitute student who brutally kills an old woman of a pawnbroker, and embarks on a cat-and-mouse game with the examining magistrate. As his guilt and alienation from society intensifies, only Sonya, a prostitute and, like him, a social leper, offers any hope of redemption.

This adaptation of Crime and Punishment premiered at the Citizens' Theatre on 5 September 2013 and subsequently toured to the Liverpool Playhouse and Royal Lyceum Theatre, Edinburgh. It was directed by Dominic Hill, designed by Colin Richmond, the sound designer and composer was Nikola Kodjabashia, and the lighting designer was Chris Davey. The cast was Adam Best as Raskolnikov, Mabel Clements as Nastasya, George Costigan as Marmeladov/Porfiry Petrovich, Ameira Darwish as Dunya, Chris Donald as Skabichevsky/Lebezyatnitov, Cate Hamer as Alyona/Pulkheria/Katerina/Darya, Jessica Hardwick as Sonya, John Paul Hurley as Ilya Petrovich, Jack Lord as Luzhin, Obioma Ugoala as Razumikhin. 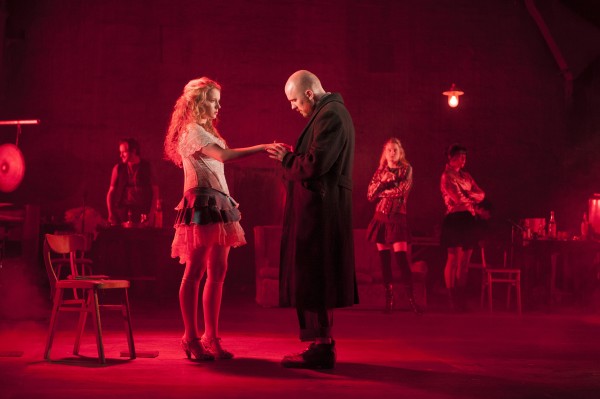 Few writers had a more dramatic life than Dostoyevsky. As a young man he was involved in a secret revolutionary group which planned acts of terror. The group was discovered, and Dostoyevsky like the others was imprisoned, interrogated, taken out to face a firing squad. At the last moment he was pardoned and sent to penal servitude in Siberia, where he worked and slept alongside murderers.

Crime and Punishment is not autobiographical but it is the writer's personal experience which accounts for his intimacy with the murderer-hero, and consequently our intimacy. Dostoyevsky the revolutionary had plotted murder for a cause (the liberation of the serfs) and in prison camp he he had spoken to a variety of murderers and sensed the different emotions in play - pride, horror, vanity. This is the experience he draws on to get inside his anti-hero's heart and mind.

The novel is a gift to adapt because Dostoyevsky is both a very theatrical novelist and a dramatic one. He creates great dramatic scenes, and characters who are - at the deepest level - in constant crisis. Who are always improvising, like actors searching for moments of truth.

"It's both a classic come to life and an urgent new work that develops its own style and language."
THE INDEPENDENT

"A fluent, beautiful, profoundly theatrical account of one of the great stories of world literature."
THE SCOTSMAN

"Brilliantly adapted for the stage."
THE TIMES

"The depth, dimensions, light and shade of the stage pictures resemble Orthodox religious paintings, and when Raskolnikov finally lets love in, it's the most painful of enlightenments in a fearlessly rich production."
THE HERALD